As the muscles of the inner thigh work together, the Tai Chi practitioner must focus and control the energy produced so that balance and power are focused and controlled. Although, it is beyond the scope of this article to review the specific points of origin and functionality of each of the muscle of the leg, it is clear on a practical basis, that the Tai Chi  practitioner will increase power, with effective focus. As the practitioner is able to relax and subsequently compress energy in the body, an awareness of energy or Chi, is evidenced by rooting; compression yields the release energy during the practicing of the Tai Chi forms.

The primary muscle we are focused on is the vastus medialis, since it is one of the strongest inner thigh muscles that relates to running, jumping, golfing, punching or kicking and far beyond; it works closely in conjunction with the adductor longus along with other upper leg muscles. Tai Chi Chuan begins with releasing the crotch or “Sun-Kwa” 鬆胯 and the relaxing of the vastus medialis muscle, as it loosens the inner thigh muscles. (see diagram below)

When the muscles are contracted, they energize the “Chi” or flow of energy, which continues to flow into the fingers and palms, as it directs them to form a posture. The focus on and energizing of the inner thigh of the related muscles is essential. The force of each action is proportionate to the amount of focus and the energy produced. It is of the utmost importance to relax these muscles prior to an action, since the “relaxing” is necessary for the action to be effective. 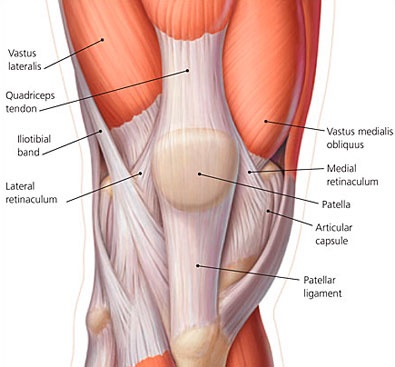 The higher we want jump the more intense we have to contract the related muscles. That is to say, the greater the muscle force needed, the more we have to flex the hip joints, tilt the torso, and bend the knees and ankles.

In other instances the vastus medialis muscle on one leg contracts, the muscle on the other leg is relaxed. However, both may be contracting at the same time in preparation for a high or distance jump or it also may be necessary to compress both muscles for movement against heavy resistance. The alternating of releasing and contracting of the muscles enable the runners to run and a boxer to punch continuously. The quicker the contractions can occur, the more the speed and more the force that will be generated.